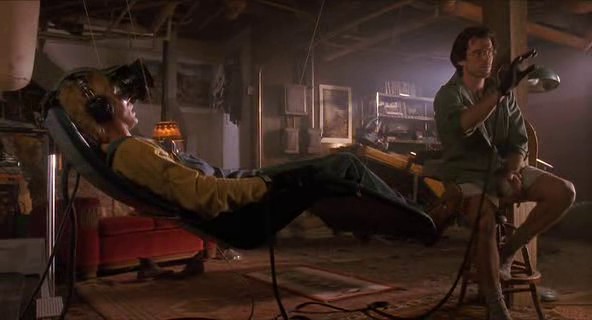 Virtual Reality is frequently featured in science fiction. Often it is used as the setting for a dystopian future: we are all so sick and tired of our polluted planet that we jump into a ‘perfect’ VR alternative. Of course things go badly wrong from there, but it’s a nice idea in theory.

One of the slightly more unusual uses of VR in fiction though is found in the 1992 film The Lawnmower Man, which in turn was based on a Stephen King short story. In the film (which is completely different from the book), Pierce Brosnan’s Dr. Lawrence Angelo takes a hapless neighborhood simpleton and attempts to turn him into a genius through the use of virtual reality.

I remember thinking at the time: how can VR possibly make someone smarter? I wrote this off as dumb, and as such was a little turned off by the whole film.

But as it turns out, that was a failure of my imagination, rather than the film’s plot. Because actually, education and brain training are two of the most exciting potential applications.

And I got to experience this incredible science fiction potential for real very recently. Read on to learn how VR training will change the world, and what our experience with it was like.

How VR Changes Your Brain

You see, virtual reality’s big selling point is that it is able to submerse us completely in a virtual environment that is almost indistinguishable from the real thing. Most importantly, the brain is unable to tell the difference here, and will believe in what is going on around you as though it were happening for real.

What this means in turn, is that everything you learn and experience in VR is far more likely to illicit change in the brain. You’re not just reading dull facts: you’re experiencing a reality. More of your brain is lighting up as it processes different senses, and everything seems more vivid, more real, and more important. The brain loves cross modal, multisensory learning.

And so, the obvious combination would be to take whatever it is you’re trying to learn, and then to experience that learning in a virtual environment. Instead of reading a textbook on mechanical engineering, it would be significantly more powerful to actually jump into a simulation and attempt to build a car engine in that space. This isn’t just far more engaging and memorable, but it also creates many more opportunities for experimentation, for contextualizing dry information, and for being guided by tutorials, arrows, highlighted elements in the environment and more. Using VR, the average person can experience situations and challenges that they would never encounter in the real world and they can learn from that experience.

The potential for learning through VR is HUGE, which is why DARPA and other organizations are increasingly investing in it.

The theory of VR training is nice and all, but experiencing VR training for real is what really brings this exciting future into stark relief.

We tried two applications: one was a basic plumbing tutorial that could one day help us to solve more of our own problems. The second was a military application demonstration.

For the first app, I was being taught how to install an isolation valve. This simply little gadget allows you to cut the water supply from a single appliance or room in your home. Leaky shower? Then just turn it off at the valve, rather than isolating the entire supply.

As it turns out, this is quite an easy thing to do – meaning you don’t need to pay a plumber $100 for the privilege of coming out to do a 10 minute job.

In the app, I found myself in an airing cupboard faced with two pipes, a box of tools, and a couple of supplies on the other side. I could reach to either side and select anything I wanted by picking it up with the Oculus’ touch controllers. Occasionally items would clip in and out of my hand, but for the most part this was an incredibly intuitive and realistic experience.

To start with, I notice that the saw is highlighted red, as is a middle section of one of the pipes. An instruction window tells me that step one is to cut the pipe in the middle. I do this, and then get prompted to pick up two compression nuts which need to be maneuvered onto either end, just past the point where I cut.

It’s only really a few more steps and soon the valve is installed. I try being belligerent a couple of times to see what happens when you don’t follow instructions and I am simply reset to the previous step. If I wait too long to take an action, an arrow makes it very clear what I’m meant to be looking at, or a voice in my head prompts me with clues. I’m also shown what alternative pipes and valves might look like for different homes.

After 10 minutes or so, I have successfully installed my valve and am instructed that it is safe to reset my stop cock. I am overcome with a sense of accomplishment: to all and extents and purposes I have done this myself. And I now feel much better about potentially doing this myself in future.

The next app is a lot different. This time, I’m placed into a shooting range and given a gun. In a similar manner, the gun highlights parts that need touching and adjusting but this time the difference is that I’m actually holding a plastic gun in the real world. Thus, I can manipulate it just as I would the real thing. After some lengthy set up (this is much harder than the movies make it look!) I am shown how to stand correctly and lean into the gun with the soft part of my shoulder. It’s explained that if I get this wrong, the kickback will leave a nasty bruise! Seeing as the ‘toy’ gun really does have a motor inside, I am very keen to get this right.

After successfully missing all but one target, it is time to reload again. This is an app that can be run ad-infinitum. And while I’m pretty bad right now, I wonder how quickly I could become proficient if I had this app and the prop to take home with me?

My colleagues had similar experiences with their apps. One was playing table tennis (using a commercially available game called Eleven), while another was handling radioactive substances with large mechanical gloves!

In short, our experiences with VR training were eye-opening. The technology is the exact same as what’s available for the home right now, but with these apps and props, its potential becomes amazingly apparent. In fact, this technology could even be dangerous should it fall into the wrong hands.

It’s exciting to imagine, but in the next few decades, we might all become Lawnmower men.