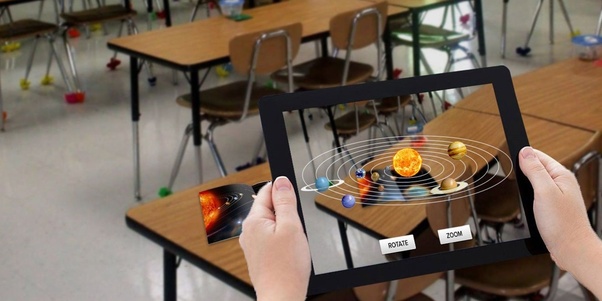 It’s a really exciting time in the world of education. Thanks to ever-advancing technology, educators now have access to incredibly useful tools that are more effective than anything they’ve ever had access to before. Augmented Reality (AR) is just one of the forms of technology that teachers are now using in their classrooms, and it’s truly making a huge difference in the way that they teach and the way that their students are learning.

AR is highly motivating and engaging. It’s been found to be an incredibly effective way to teach students about highly advanced technological processes, such as STEM and coding; plus, it makes the process of learning this information faster and more fun. Add to that the fact that students are able to retain the information they are presented with via augmented technology and it’s easy to see how it’s changing the shape of learning.

According to recent predictions, it’s been estimated that by the year 2025, two billion members of the world’s population will be comprised of the Generation Alpha (aka iGeneration), the youngest generation. This generation is comprised of children who are born between the years 2010 and 2025. They are truly unique in that they are the first generation that contains members that were only born in the 21st century. Given the technological advances that have occurred and will continue to occur during their time, this generation will be the most technologically-advanced of any generation to date. They’ll also be a generation that is the most immersed in technology use.

Members of the iGeneration use technology on a regular – and rampant – basis. Things like personal computers, laptops, tablets, smartphones, and video games are the norm for this demographic. Because technology is so readily available and used so often, this group naturally adapts to it. In fact, many children in this generation use some form of technology before they even start their school day. To put it simply, they don’t know a world without technology, and as such, schools should do their best to integrate technological tools into the classroom setting. Doing so assures that the needs of today’s learners are being met by presenting them with information in a manner in which they can best relate to it.

The Use of Immersive Technology in the Classroom Setting

More and more educators are realizing the benefits that technology can offer to students of the iGeneration. As such, they are beginning to implement highly advanced technological tools in the classroom setting.

Various types of advanced technologies that can be seen in schools across the globe include:

In the year 2018, augmented reality demonstrated record growth. By the year 2023, this market is poised to be work a mind-boggling $61.39 billion US dollars. Between 2019 and 2020, AR has been said to be the most important form of technology to watch, as its availability and use is really expected to boom during this year. Given how commonplace AR has become – and the fact that it going to become even more readily available – it’s definitely safe to say that it is here to stay. Moreover, it’s safe to assume that it is going to become a vital component of all types of industries; education and training included.

AR in Education and Training

For children that are part of the iGeneration, the use of augmented reality in the classroom setting is going to create a highly advanced and totally unique learning experience; an experience that older generations will have never experienced themselves, and one that will surely be impressive.

Schools that implement AR technology into their classrooms, as well as for use during field trips, are poised to better prepare their students for the future of the world. It’s easy to understand why given the fact that AR can present information is such an engaging and fully immersive way; as well as the fact that technology will only continue to become more commonplace in our society.

Academic institutions and educators that fail to utilize immersive technology in their classrooms are going to face significant challenges. Why? – Because all learners need to have their needs met if they are going to succeed, and a fundamental part of meeting those needs is presenting information in a way that learners can best relate to. Since the iGeneration is so absorbed in technology – it’s literally a part of their everyday lives – when the content they are taught in school is presented in a manner that they can better relate to (technology), they are more apt to not only better understand the information that they’ve been taught, but also retain it.

Augmented reality involves the presentation of artificial stimuli to present what looks like real, physical, and tactile elements through the use of multisensory technology. In other words, this type of technology engages the senses; specifically sight and sound. The use of AR quite literally makes users feel as if they are experiencing something that they might not otherwise be able to experience; it can bring them to new places and truly immerse them in different experiences.

There are a multitude of ways that augmented reality can be used in the classroom. Some examples include:

The future of education is quite exciting, thanks to technological advances, like augmented reality.