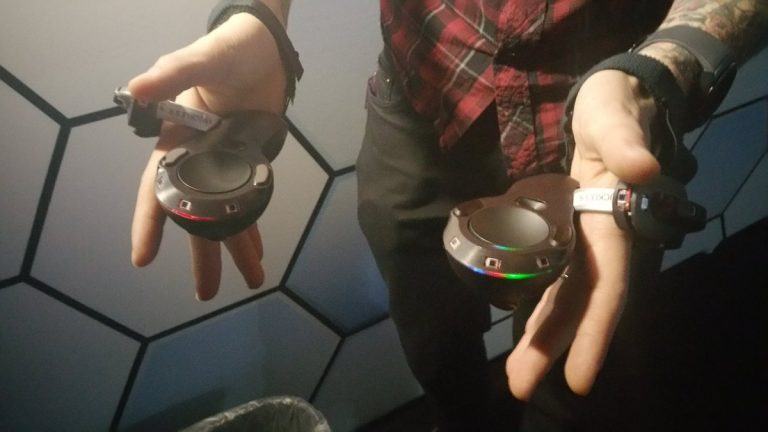 One drawback to current VR systems is the complexity of the many different user interfaces. This brings up an interesting aspect of virtual reality: For a system based on visual and auditory experiences, the entire process depends on the hands.

Originally, VR was simply a screen inside a pair of goggles. But the addition of hand controls was quickly added. This tactile element of hand and body tracking greatly increases the immersion factor of the VR experience. The two major products in the VR space (no pun intended) are the Oculus Touch and the HTC Vive.

Game and tech development company Value was an original pioneer with the Vive, and now they’re released a new product which VR developers and aficionados. Called the Knuckles, this new device is a wearable VR controller which tracks each finger on your hand. The device works with the existing SteamVR system. Still in development, prototype Knuckles controllers have recently been shipped to select VR developers.

Instead of holding a controller, the Knuckles device simply straps into your hand. You don’t have to hold the device at all times. If you open your hand, the controller stays attached and tracks your finger movements.

The user isn’t constantly holding a physical object. This is actually the first controller where your actions in the virtual space correspond to actions in the physical space. Wrapping your hand around the controller lets you grab an object in virtual reality.

In what may not initially sound like a compliment, the Knuckles are easy to forget about. You’re not constantly gripping a controller. Instead, your hands are open and free. Plus, when you grab an object in the virtual space, your fingers will grab the device in the real world, too.

Generally speaking, when the VR equipment is natural to operate, the user is able to live inside the virtual space. You want the VR user to be organic instead of intuitive. For example, a dial you physically turn can be intuitive. But reaching out your real hand to grasp an object in virtual space is organic.

Knuckles opens the door to gesture movements. In social VR environments, gestures movements allow for fluid, natural actions such as gesturing, pointing, waving and more. The controller replicates your exact movement instead of snapping to a new position or approximating your gesture.

Gesture movement also allows for the ability to navigate dense data. For instance, hands and gestures can be used to develop an extensive language. Imagine creating and using virtual painting instruments of various sizes and colors.

Many developers believe the future of VR controllers will be a device which is easy to use by the general public. Think of devices like the Wiimote, Vive wands, game controllers and similar. With the introduction of Valve’s Knuckles, maybe the solution isn’t the type of device, but simply less of a device at all. With Knuckles, the future of virtual reality is literally in the hands of the user.